A downloadable game for Windows, macOS, Linux, and Android

A short simulation game made by one person in one month.

Take control of the unnamed protagonist as she moves into an apartment with her girlfriend. Unlock new clothing, discover new scenes, learn more about this mysterious couple, and most importantly... Enjoy life!

In order to download this game you must purchase it at or above the minimum price of $3 USD. You will get access to the following files:

Hi! I'm not the best at leaving reviews but I felt the need to with this one.

I downloaded this game through the Racial Equality and Justice bundle and I'd give this 4/5!!

I played this game on my stream (For about 45 minutes/10 days) and honestly, it was such a lovely experience for how far I got! Although the presentation/GUI could use some tweaking here and there, the rest of the game was a joy to play. The writing was amazing, I loved the slight off undertones it had, especially with Heroine asking odd questions or responding to things in a very strange manner and the main character just shrugging it off.
It was also nice to get random flashbacks, it gave a nice addition to the world-building and the main character's thoughts. It makes me want to play more of it in my own time to figure out what is going on.

But after a while of playing it did start to get a bit boring as I had no idea what the actual end goal was, nor did I know if the game had an ending in the first place. Dialogue tended to repeat itself and there was no build-up to the flashbacks, they just randomly happened.

With the skin tone changes, I kind of wished that was something you could do before the game properly started instead of it being something that you buy for her. It would have made me more attached to the Heroine if I could give her a customised base design from the get-go and then buy clothes for her to change into afterwards.

I'm not sure if you'd ever come back to either update the game or fully do it over but I'd definitely like to see how far you'd take it if you did so!

Thank you for the comment! I'm glad you enjoyed it~

I agree with the negatives 100%. The game's structure relies somewhat on there being a lot of content, but unfortunately the scope of the game doesn't match that demand. It doesn't really have the legs to run a marathon, ahaha. That's definitely something I want to improve in future.

The initial customization idea is really good! I wish I'd thought of that myself. I'll definitely keep that in mind when I come back to By Your Side. Thanks for the feedback.

Oh, and most importantly, thank you for supporting the bundle!

This was a baffling experience. I played with a friend, and there was a start to the story, and then we kept looking for an end to the story and there just didn't seem to be one. Entire conversations kept repeating themselves. Everything seemed off but without quite enough realization that we were positive it was intentional.

I found this whilst browsing the games list for the Racial Equality and Justice bundle. This game is so baffling, pretentious and awkward that... well if nothing else, the opening cinematic had me grinning from ear to ear.

Where to start... the presentation is horribly flawed. Everything from the characters to the backgrounds to the interface has a myriad of issues. For the most part it looks OK? Like, I can tell what's going on most of the time, but... it just feels extremely rough. Everything has this very uncanny quality to it.

The writing is incredible. This is the kind of stuff only spoken in legends. For the most part, things just sort of... happen. The tone flip-flops from actually kind of sweet and heart-warming to surreal and creepy on a dime. Every character talks like they were born on the moon and what little exposition there is contains a lot of gaps and leaves me feeling confused.

OK. So from what I've gathered you play as a young girl named... uh... Me? Who wonders off into the woods, discovers a fairy and saves her from dying by offering her some water to drink. In return for her kindness, the fairy grants her a single wish. When Me refuses, the fairy gifts her the ability to see her soulmate by taking pictures of them...? This encounter understandably wigs Me out and she vows never to take a picture of a human being ever again. Fast-forward about a decade and Me is somehow a professional photographer with a girlfriend named Heroine and they're living in an apartment with a garden and a TV.

And Heroine is a truly insipid character. She's cute I suppose, but something about her seriously rubs me the wrong way. She doesn't seem to have a career or any aspirations beyond collecting stuffed animals, yet she still asks Me to buy expensive clothing for her. I seem to remember in one conversation she asked me if Me "needed her to live", which just makes my skin crawl... she contributes nothing to the relationship and acts like a bland robot the entire time.

The actual gameplay isn't great either. It's got a good idea for a core loop, but there are just so few options to pick from that it becomes tiresome very quickly.

Character customisation is nice, but customising a completely different character in this context is really weird. Like, wouldn't it make more sense if her outfit was randomised depending on what clothes you had unlocked already, with different probabilities tied to each? That'd at least feel more realistic. And the fact that she starts out with vampire-pale skin and you can pay to give her a darker skin tone with no further context makes me tug at my shirt collar slightly.

Look, I'm sorry, I really wanted to like this. I'm intrigued by the premise. It's nice to see games tackle established relationships. The app icon makes me smile. I like visual novels and yuri in general but... I struggle to find anything nice to say about this one in particular.

I understand this is probably your first project and you were under heavy time constraints. It's nice that you took a project and saw it through. Thanks for offering an android version by the way. That's nice. And by all means continue making games! I look forward to seeing what you learn from this experience to put into future titles but... let's just say I'm glad I didn't pay full price for this.

Thanks for the response! Despite the negative points, which I do agree with (the UI and presentation is definitely rough, and the gameplay lacks enough unique content to make it truly shine) I think you really took notice of the game's main focus: a strangely unnatural world that tries to disguise itself as an everyday human experience.

From the magic, to the Heroine's pushy idea of "together forever", to the protagonist's willingness to accept it all as normal. The slightly-strange character designs, twisted world history, and distorted soundtrack further this vibe. It feels fine sometimes, but other times you can't help but question if the Heroine is even safe to be around.

It's a prototype story concept for a future tale that I one day hope to create. When I feel like I've improved to a point in which I can do the story justice, it'll arrive. I hope, despite your impressions, It'll grab your attention when that time comes~

Oh, and for context on the skin tone customization, the game's setting is Northern England, and there's a bunch of random throwaway lines to the culture of the region. The boom of tanning—particularly with young adult women—is a defining trait of the area's fashion. It was marketed as a fake way to look rich, healthy and refined, even as a way to cure depression and anxiety (though in reality it was predatory, creating a syndrome known as tanning dependance.)
Nowadays it holds all the opposite connotations, largely due to British tourists being unsufferable. Teens/young adults still seem to love it as a confidence booster though.

So all that creepy subtext was intentional? Could've fooled me. I had a feeling that you were buying some kind of tanning product from the shop, but I saw a possible negative connotation I saw that might have been overlooked. I'm glad it isn't that.

Also the game is set in northern England! That's cool. I feel that's a pretty under-utilised setting in games.

Cute little game with a with some fun dialog.  Lots of potential for adorable outfit combinations. 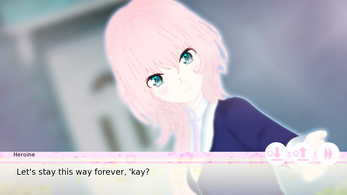 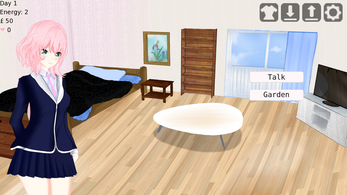 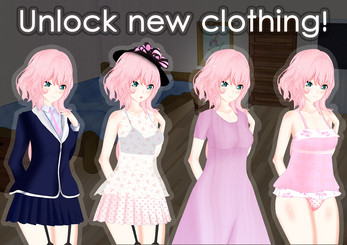 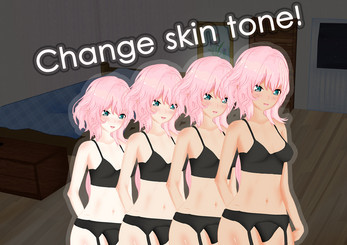 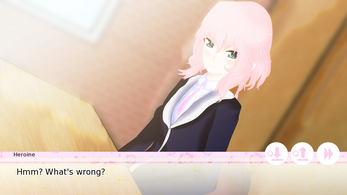